Good afternoon dearest blog readers, I do hope you are all having a lovely bank holiday and enjoying the Diamond Jubilee. Paddy took his boat to the Royal Flotilla Pageant yesterday. Er what feeds me got so drenched joining in the local Jubilee festivities it looked as if she had swam up the Thames. The flat looks like Madam Twankies laundry now with all the drippy coats, jeans and socks drying.

Gizzy and I have been very busy working in the garage for some time on a special Diamond Jubilee Dune Buggy and I have to say it now looks great. We were just having a little tea and jammy dodger break before giving it a test run. 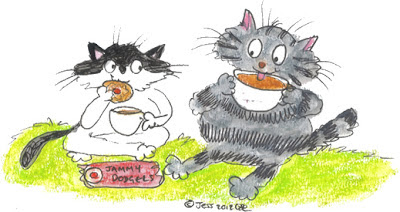 Suddenly one of the Moon Worshipping Bunnies hopped breathlessly across the common with his bongo drum and revealed the Bongo Drum Communication Network had picked up a rumbling signal to say that there was an emergency up at Tatty Mudflingers Barn (gulp!). I was filled with panic as that is also the secret location of the Mafia Bunker and a stock of Schnappsie Moonshine fuel... 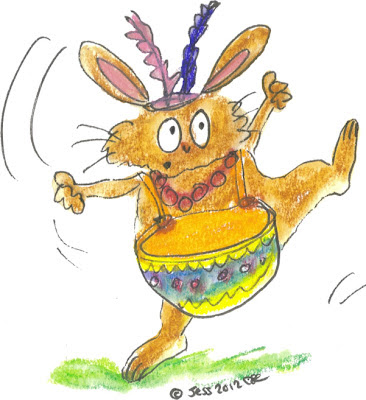 Gizzy and I leapt up into action fearing Jemmy had been raided. We jumped into the Jubilee Dune Buggy and sped off. Gizzy is mainly a mechanic but she is also the Mafia Kit Kat Gang get- away driver. We rocketed past the windmill on our newly fitted bouncy suspension wheels, we screeched past the Pheasant pub and accidentally got caught up in a long string of union jack bunting on our wing mirror. The route Gizzy took was off road and I turned the colour of pea soup gripping onto the reinforced roll bars. As we shot over the bumps who should appear... 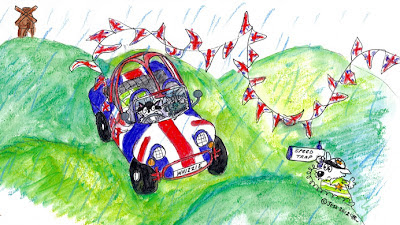 Oooo No!! Its Sergeant Wilberforce with his Speed Trap Gun which looks like a big hairdryer.
Recently dear friends I can tell you during the great deluges of rain the rivers have been flowing at an alarming rate and Sarg Wilberforce has been issuing speeding fines left, right and centre to all the ducks and geese as they zip along in the fast flowing river. This had caused many of the feathered community and small animals to have bad feeling and word has filtered back to Jemmy. She felt that some bunny bother may have to be dished out soon to Sarg Wilberforce... (gulp).

As the dune buggy bounced over the hill Sergeant Wilberforce clocked us! I knew we were in trouble then but to my horror Gizzy wildly took her paws off the steering wheel and stuck her tongue out at the Sargeant! 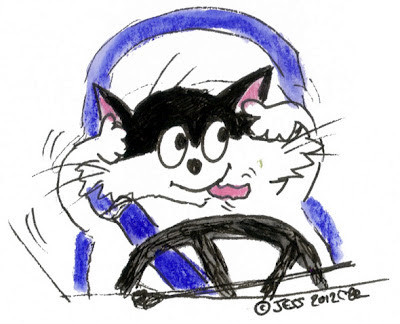 She blew a massive rude raspberry noise at him and then grabbing the wheel put her paw down and we shot out of Sarg Ws sight. Ooo I did feel ill and now Gizzy was deep in big bunny bumbles for sure!
We screeched to a halt outside Tatty Mudflingers barn and we charged in ready for a Mafia rumble!
Well dear blog readers...the emergency was clearly over and Tatty and Jemmy had everything under control.

WOW!!! Lavinia had given birth to four very healthy little fluffy marmalade kittens in the straw! Tatty had wrapped one in his hat and Jemmy looked all sparkly eyed cuddling the fourth and smallest one. Due to them all being born during the Royal Diamond Jubilee it was fitting they are called William, Harry, Kate and Lizzy! Ahrrrrr! 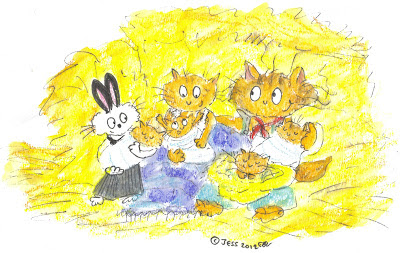 Later....I managed to tell Jemmy about the bother with Sarg Wilberforce. I thought she would kick off but the new baby kittens being born had mellowed her mood. She took us down into the bunker and disguised Gizzy in a fez and woolly black beard. She then made a phone call...... 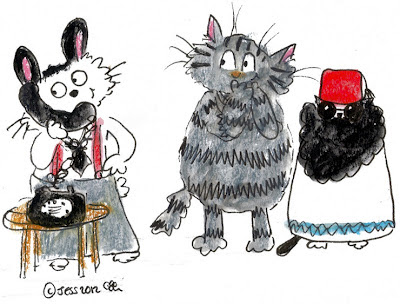 She reassured Gizzy that Sarg Wilberforce would soon be hanging up his speed trap gun. I was a bit befuddled about how exactly Jemmy would save Gizzy from being locked in NutsVille Jail...but as ever the bunny fixed everything. Mysteriously Sarg Wilberforce was caught on film in a rather compromising position with Busty Barker who Jemmy recently supplied with a large red energy saving light bulb and plush furnishings! 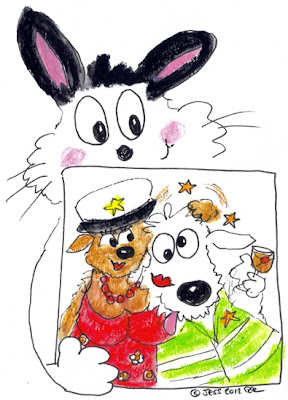 Clearly Mrs Sargeant Wilberforce would not want to find out about this picture so all the little ducks, geese and Gizzy Whizzie were let off due a technical hic -up with the readings on a faulty speed trap gun! No doubt full of water due to all this rain!
Until next time, taaa taaa.
Posted by Idgie the Cat at Monday, June 04, 2012 No comments: