Back to the Drawing Board

Brrrrr - What a freezy-pop day!

I do hope you are all keeping warm and having enough to eat. Gizzy and I have been hanging up food for the feathered community to snaff. Its fearful tricky for the tweeters n chirpers when its icy as all that pecking about for nibbles bends their beaks.

As you know Jemmy Jim Jams has landed us all in it by agreeing to design and build a Super Yacht for this billionaire bunny that she met in Spain.

Gizzy looked rough as ol' kitty litter from lack of sleep worrying about how to build the yacht engine. We thought we should visit dear ol' Atticus as he was told to start on designs immediately... 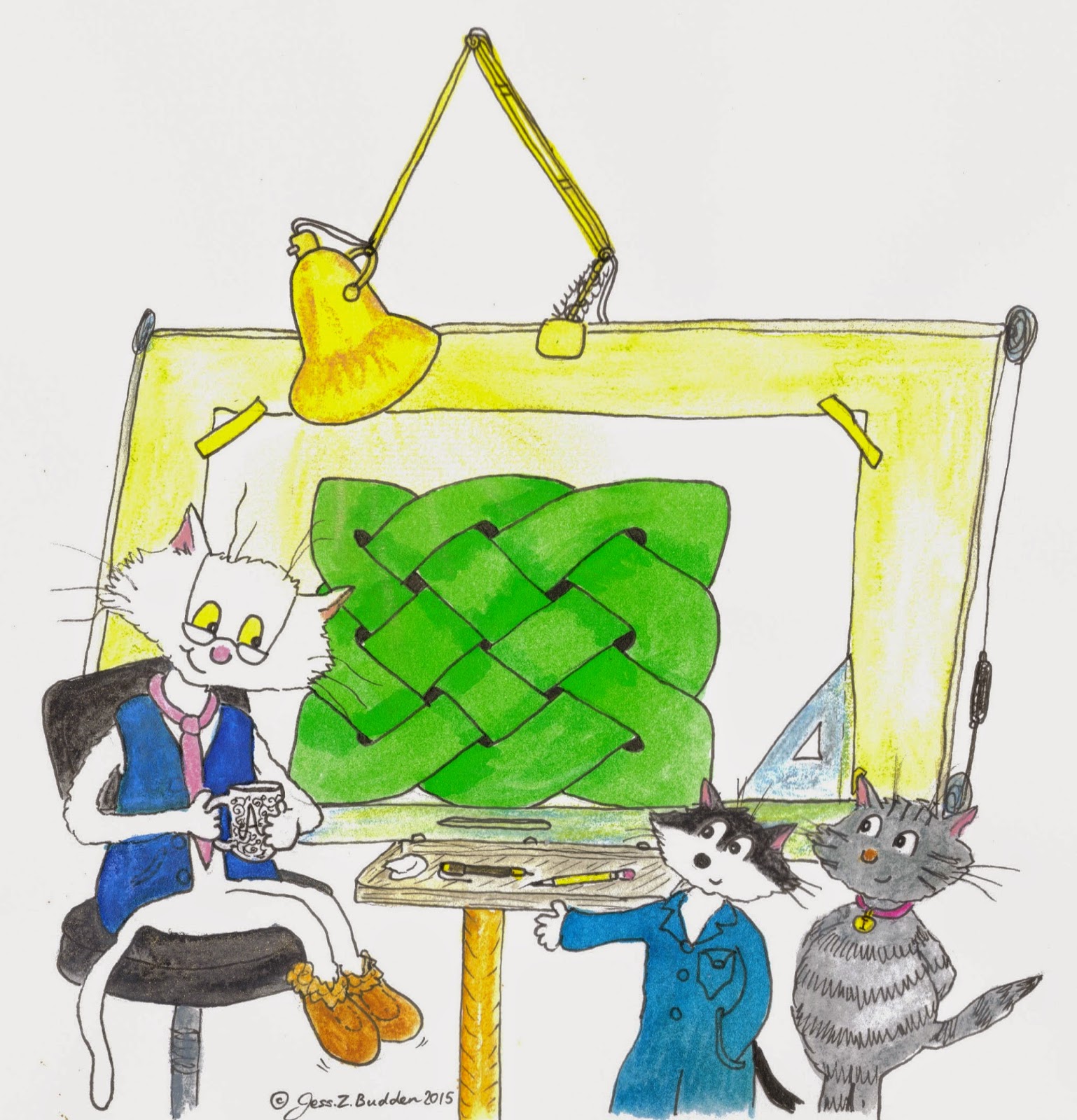 I thought Atticus would be worrying about the Yacht but when we arrived we found him care-free under his 'sun lamp' having a cup of tea. He had his fluffy moccasins on and had been drawing a Celtic knot for fun.

Atticus said he had the most awful dream that Jemmy had asked him to draw a Super Yacht.  He giggled at such a daft notion, what a silly idea...

We told him kindly and gently as possible that it was not a dream - It was in fact a nightmare. We had to get some smelling salts to bring Atticus round ... ( dont worry, hes alright!...anxious but OK)

Meanwhile ..Tatty and Angus had been told by Jemmy to go out and do a big customer survey and record what everyone would expect to find on a billionaires Super Yacht. Tatty wisely thought he would start the survey up at The Clumps Woodland due to the large population of Moon Worshiping Bunnies. Lots of feedback there and they could also visit Boo Boo Massou's Hut to thaw out.

Jemmy and Katya Hoppenorf are going to Southampton Docks to check out the posh boats and do some reconnaissance. I am secretly hoping the ol' rabbit will realise shes bitten off more than she can chew!

As for me, I'm meeting Lavinia and the kittens who are flying back from Spain with all those crates of oranges. We've got to make the Marmalade.

Don't forget to feed the birds and I'll be back soon.

I do hope you are all well and have warm paws.

I received a lovely sunny letter and photograph this morning from Lavinia Mudflinger and the marmalade kittens. They are all out in Spain. I thought you would like to see the picture as it reminds ourselves of sunnier days to come. 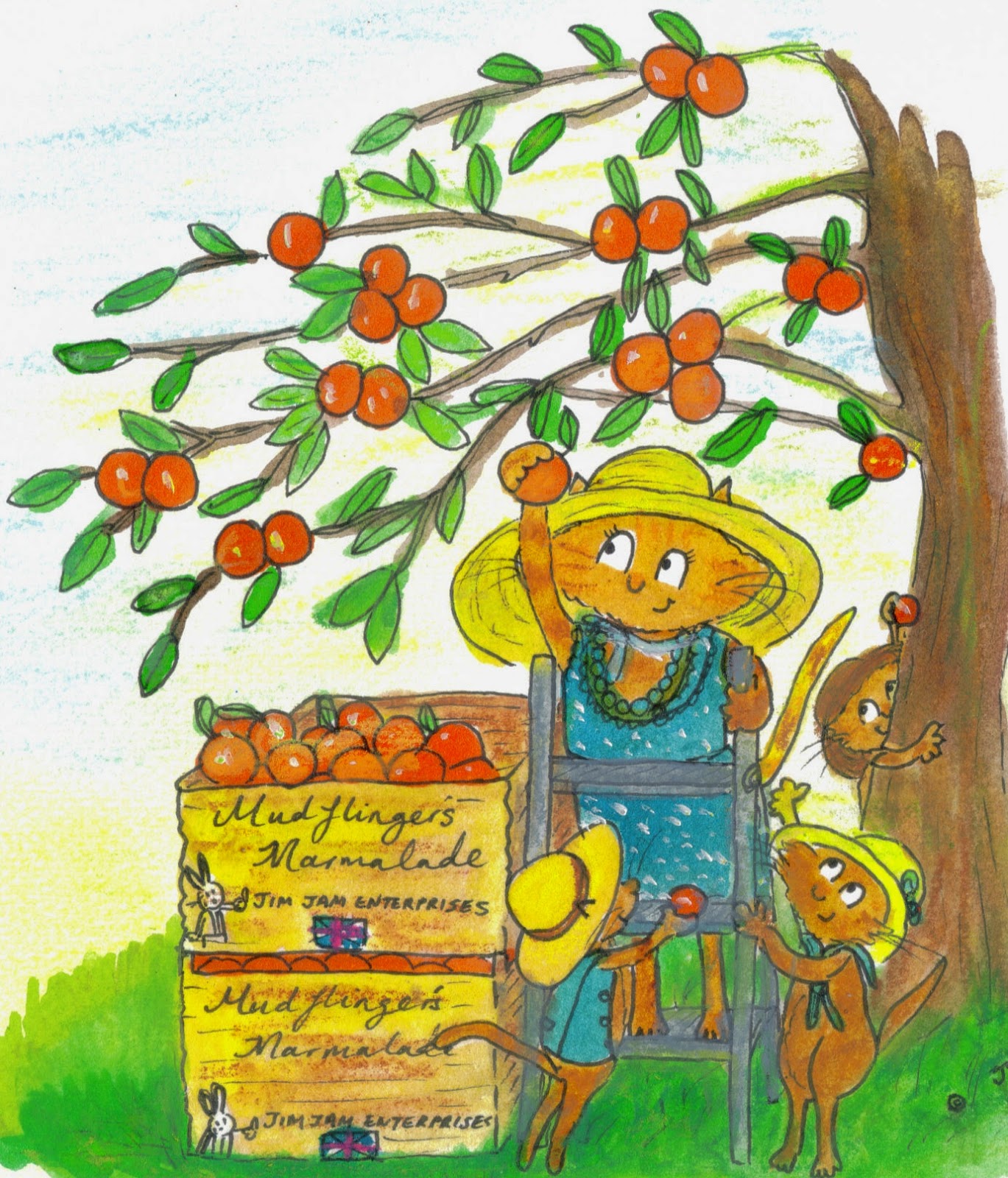 Tatty and Angus are looking after the farm here whilst the rest of the Mudflinger family are on a kind of Orange Picking 'holiday' to help Jemmy. They are being paid by the crate so all the kittens have been climbing the trees enthusiastically. Jemmy pointed out the extra vitamin C and exercise is doing wonders for their fur and growth.

Jemmy did some sort of deal with the orange grove owner who wears a white suit and hat and quite by chance discovered he was a billionaire. Jemmy was all ears n whiskers...

The bunny billionaire lamented that being rich had its perks but little privacy. He looked out to sea and said...

Pound signs whizzed around Jemmy's eyeballs and quick as a flash she agreed and took a down payment for designing and building a Super Yacht!

I did try to say to Jemmy at the meeting that it was a whole different kettle of kippers to shifting Marmalade but the ol'rabbit is on a mission now and we have all got to help...

Watch your whiskers out there..

I am so glad you have popped in to read my little blog and a belated Happy New Year to you all!

Its been a while since I was last on the whisker waves. I feel such a fuzzy ol' fool as I managed to forget my password.  Fortunately little Angus Mudflinger the Marmalade Kitten who understands the technological gubbins has put me in tune with you all again.

To be fair, after the Calvados and Cherry Schnappsie testing last year nobody can recall the goings on  between then and now so I do not think you missed much...

In fact - so little has occurred Jemmy Jim Jams became restless and has twitchy paws....so invited us all to attend a 'BORED' Meeting.... 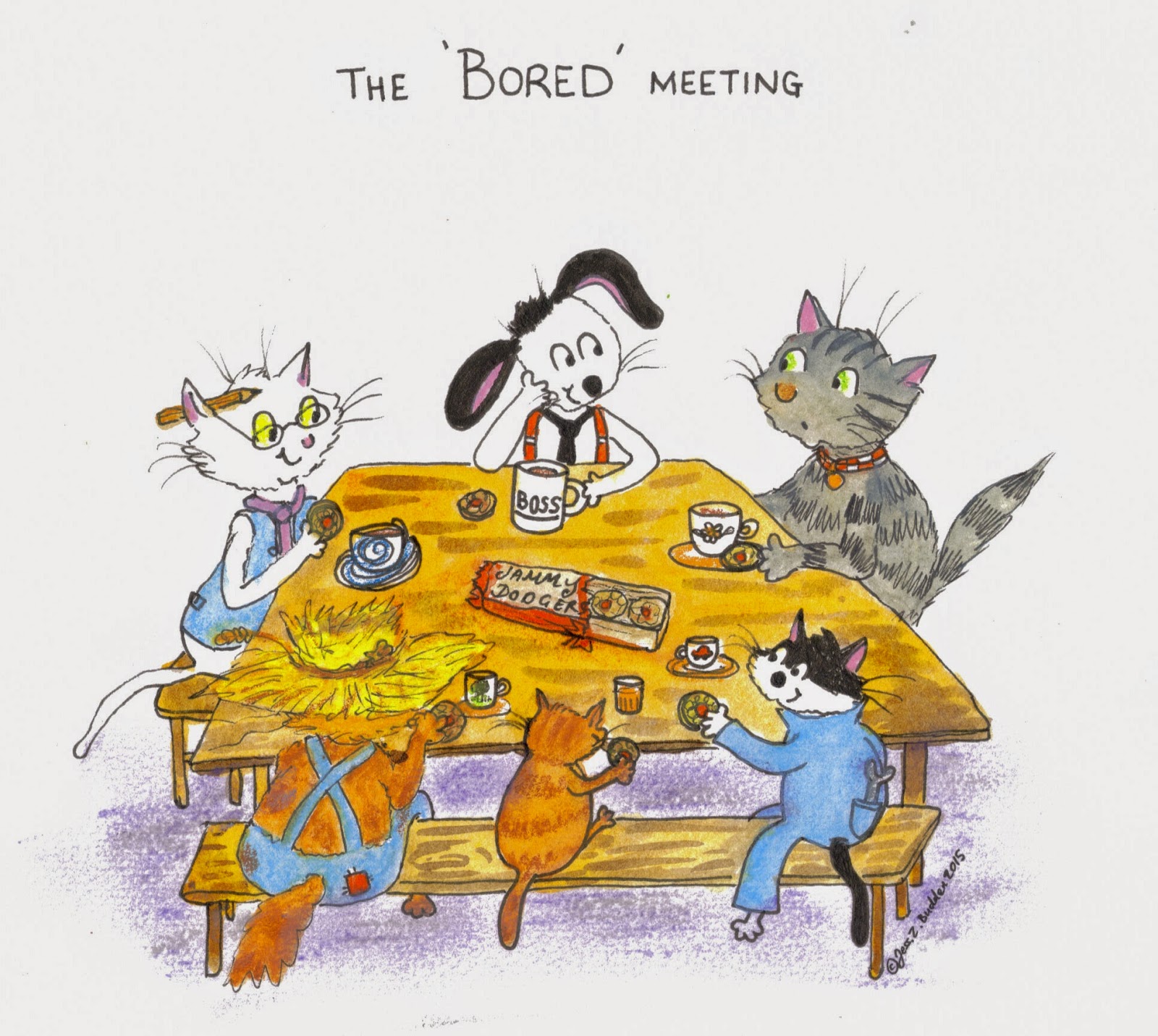 I provided the tea and Jammy Dodger biscuits and all was tickerty boo...

Its at times like this dear friends when all is quiet and ordinary that you need to watch your whiskers! Jemmy Jim Jams revealed her new idea to me for 2015..(gulp).. you can tell by little tabby face its alarming and on a grand scale.

Keep safe and warm and return soon and I will reveal the hair brained...errr ..enterprising plan.