Good Morning dearest blog readers, I do hope you are all very well?

I have been busy taking care of Atticus, as he has caught a cold and has a big red nose. Tatty made him a batch of 'Special' Sloe Juice that can be warmed up and fights off the dreaded lurgy. Boo Boo Massou also sent him a berry syrup - so don't you worry, the ol chappy will soon be better!

Whilst I was finding some more tissues for Atticus there was a little rat-a-tat-tat at the door. On the doorstep was Angus the Marmalade Kitten with his school satchel looking a bit anxious. His teacher had asked the class to find out for home work what Christmas is, so Angus came to see Atticus to find out. Atticus is very smart indeed and can answer everything on Mastermind and University Challenge! 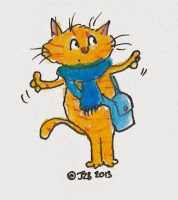 His little face fell when I told him Atticus was not very well. But I seemed to remember Christmas was something to do with a baby being born in a field of mangetout, under a bright star and some shepherds came and washed their socks at night near by. Angus looked very confused as he didn't know what mangetout was, so I explained they were classy peas. I suggested to Angus to go to speak to Boo Boo Massou the  Mystical spiritual leader of the Bongo Drumming Bunnies. 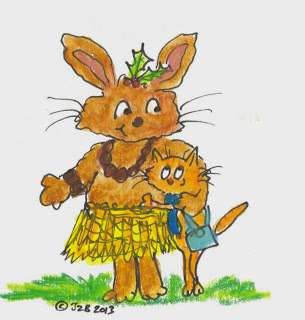 Boo Boo Massou was very happy to see little Angus up at 'The Clumps' woodland. All the bongo drumming bunnies had been making holly leaf decorations for their coming Yule Festival, they had collected mistletoe and oranges and were excited about the coming winter solstice feast and the rebirth of the new sun. There was a lot of skipping n hopping and the testing of hot spicy cider. Angus was very confused, the bunnies knew nothing about the baby and the shepherds washing their socks in a field of mangetout and Boo Boo suggested he go straight to Jemmy Jim Jams who is Angus' Godmother. 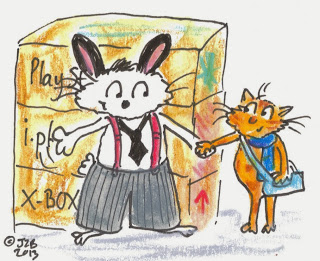 Jemmy Jim Jams was very busy indeed but always has time for little Angus and was over the moon to help him with his homework on the subject of Christmas. Angus explained about the baby in the mangetout and Jemmy didn't know about that but as soon as Angus mentioned Shepherds she got very excited and took Angus into the warehouse ( Tatty Mudflingers Barn!) - "It's all about  business opportunity dear boy and making of the ol crinkly cabbage!" said Jemmy all bouncy and animated.

Jemmy said she was taking a lot of stuff down Shepherds Bush Market to sell for Christmas, she had a big stash of x-boxes, play stations and i-phones.  She also had sacks of mistletoe and holly wreaths that the bunnies from the clumps knocked out for her at discount price. Angus was so happy to at last find someone who knew about Christmas! He made lots of notes and thanked Jemmy very much.

On his way home he could hear Aunty Gizzy Whizzy in the garage riveting an old banger car so he popped in to say hello.

They had a cup of tea and Angus told Gizzy all about the very confusing homework. Gizzy scratched her little fluffy head as she was sure something important had been forgotten. Slurping on their tea Gizzy remembered about the big turkey, the elves and Father Christmas ...then it came to her, she remembered - - Three kings who travelled in heavy traffic to a stable full of straw where there was a baby in a bed of mangetout or something. The Kings had come with gifts from the Shepherds Bush Market for the baby but were made to stay outside because they were smoking camels. Angus looked at his homework notes and sighed.

Lets all hope that dear ol Atticus gets better soon.
Posted by Idgie the Cat at Wednesday, December 11, 2013 No comments: