I bet my whiskers that the rain is really getting on your wick dear readers.

As you know Boo Boo Massou and the Moon Worshiping Bunnies have been cut off by flooding so we have been paddling out carrot and cabbage supplies by coracle. As you can imagine morale is low in the bunny tribal community, so Boo Boo hired the local Badger Theatre Group to perform 'Singing in the Rain' for some light entertainment. 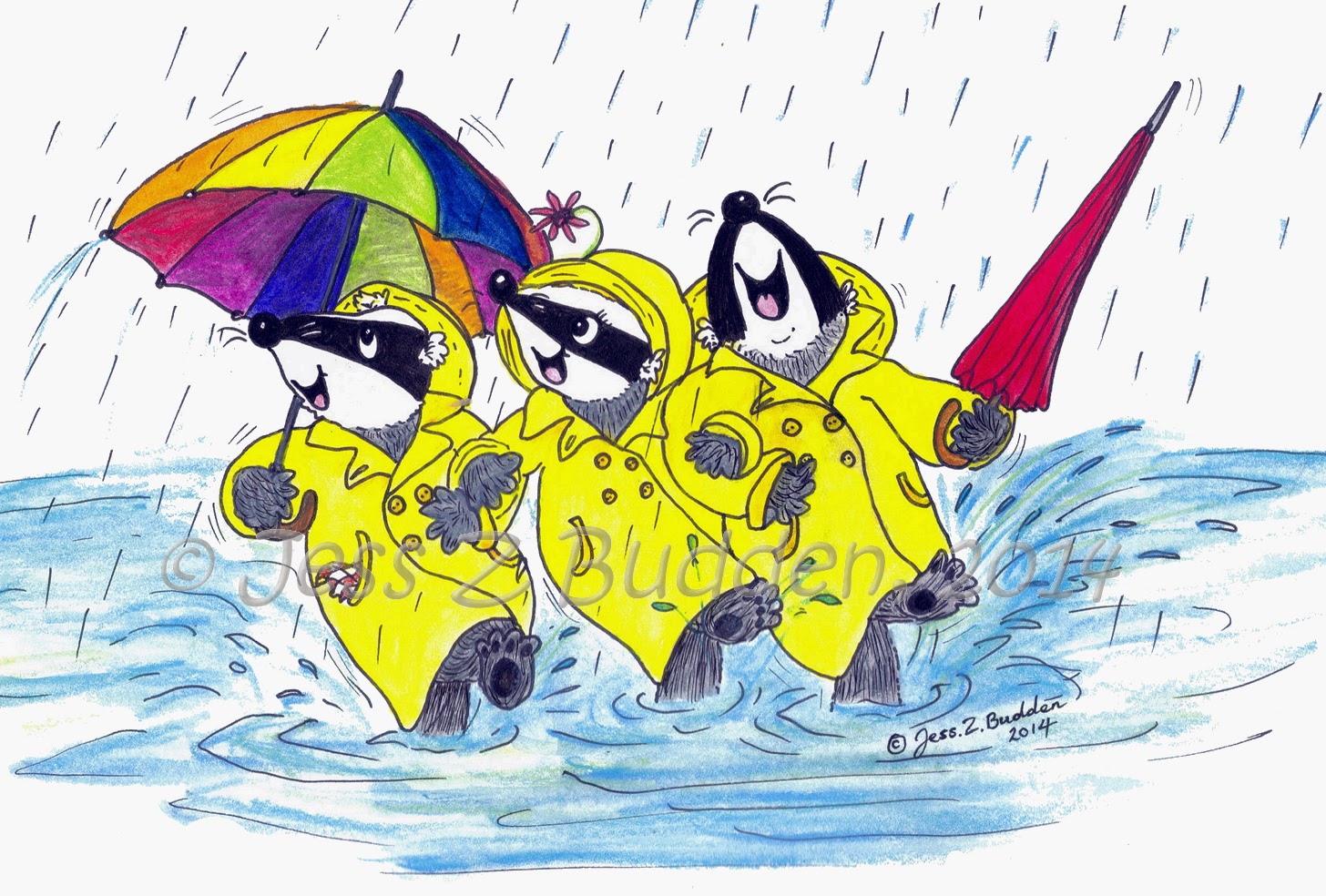 That went rather well actually!

Gizzy Whizzie handed out semaphore flags and taught a few rabbits how to signal their shopping lists to the  'mainland' so we can get them what they need.

Anyway, I must be off now, the rabbits are meant to be signalling for essential items but Gizzy has translated that one of them wants a satellite dish and a coffee maker....hmmm!

Keep your paws dry and Taa taa for now.

To see more of what we can offer and view additional products, please visit http://www.jesszbudden.co.uk
Posted by Idgie the Cat at Thursday, January 30, 2014 No comments:

Hello dearest blog readers, I do hope you are all very well.

Its been a right ol' drama  - put your paws up and have a cuppa tea and I'll tell you all about it.

It all started when Atticus packed his carpet bag and said he couldn't be doing with this Olympic malarkey and was going back home as he was cold and missed kippers so much.

I then had a phone call from home, it was Lavinia up at the Mudflingers Barn. She said we all must fly home as The Clumps Wood where Boo Boo Massou and the moon worshipping bunnies live had been cut off like an island by the floods. The Bongo Bunny Drummers were sending out a 'Save Our Fluffy Tales' messages every hour.

Just when I thought that was bad enough news - Lavinia said The Piglet Possy had managed to do up an old VW Camper and had taken it for a test drive....(gulp) 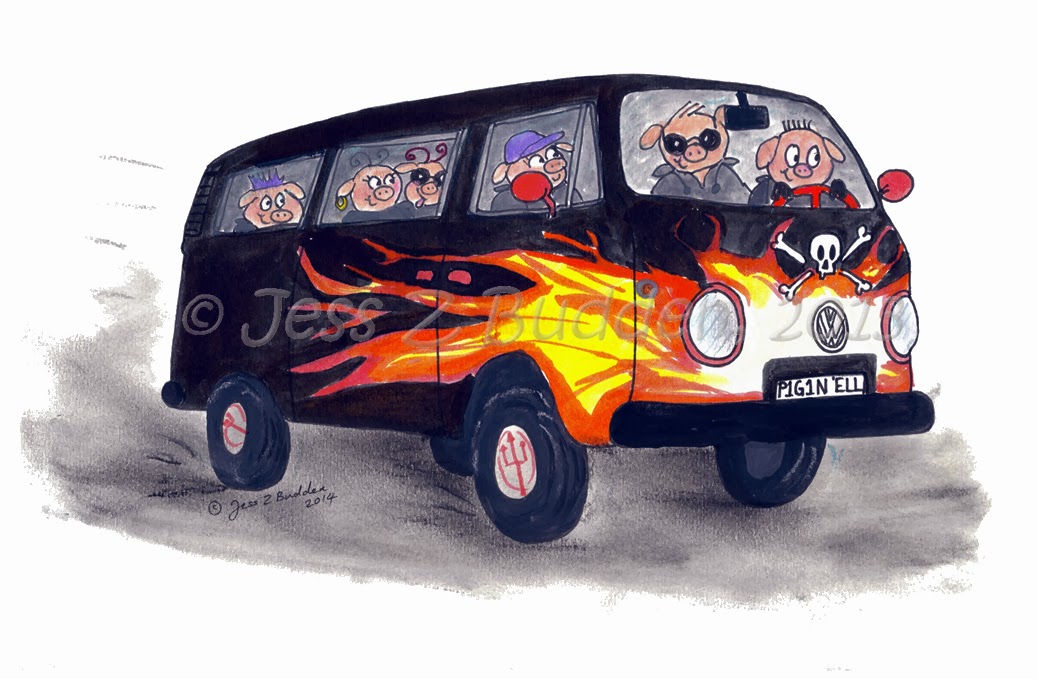 I assured Lavinia that I would tell their Godmother Jemmy Jim Jams as soon as I could find her....Trouble was Jem had hopped off somewhere..

Gizzy and I tried to find Jemmy all over the Ski Resort but there was no sign of the ol' rabbit boss. A snow storm started so we legged it back to the chalet. Where could Jemmy be!?

I was awoken in the middle of the night - my whiskers were twangy with fright - I heard a frantic knocking at the Chalet door... 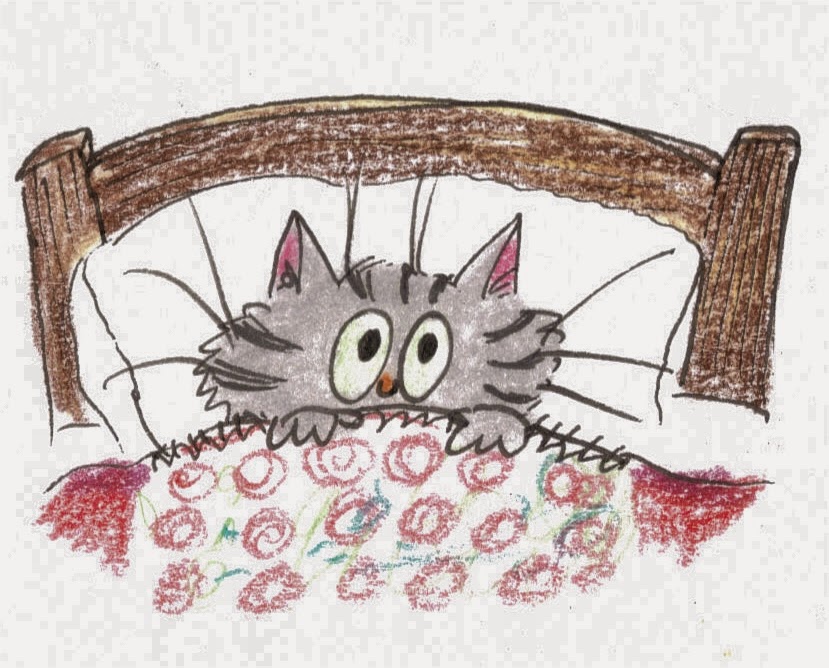 What followed was a QUICK EXIT !

It turned out that Jemmy had smuggled in a large crate of Tatty Schnapsie Olympic Edition to sell off at ...have you gawn raving mad prices.

You know whats shes like, she managed to shift the whole lot to a regiment of Cossack' s with big fluffy hats and all was well she thought.

Being a bit tickled pink with smugness and flush with the ol crinkly cabbage in her paw she shot off to the ice rink to see Katya Hoppenorf.

They were just about to put their ice skates on when there was a mighty commotion. Some of the Cossack's with the big fluffy hats and pointy swords had tried a sipsey of the Tatty Schnapsie.  It blew their hats clean off! Several nose dived into a snow drift and as you can imagine they were not very happy!

Luckily for Jemmy and Katya, the snow was so thick and falling fast they were able to hop off and disappear. Their paw prints were covered by snow and it was if they never existed.

Don't worry, we are all home safe now but we will not be resting. There are piglets to find and rabbits to rescue so I'll be back soon.

Watch your whiskers out there and ta taa.


To see more of what we can offer and additional products, please visit http://www.jesszbudden.co.uk
Posted by Idgie the Cat at Tuesday, January 28, 2014 No comments:

As you know, Jemmy Jim Jams has dropped us all in it....errr...I mean to say she has encouraged us to take up Olympic Winter Sports.

I am meant to be trying to persuade Atticus to wear the correct modern aero-dynamical cosi for the Alpine Downhill event. We have got some flashy ski's now but he will not take off the pink fleece onsie or his thermal rainbow hat as he says he wont be bullied by anyone or conform.

However he did agree to go on the ski lift with me at lunch time and have a cup of hot chocolate. 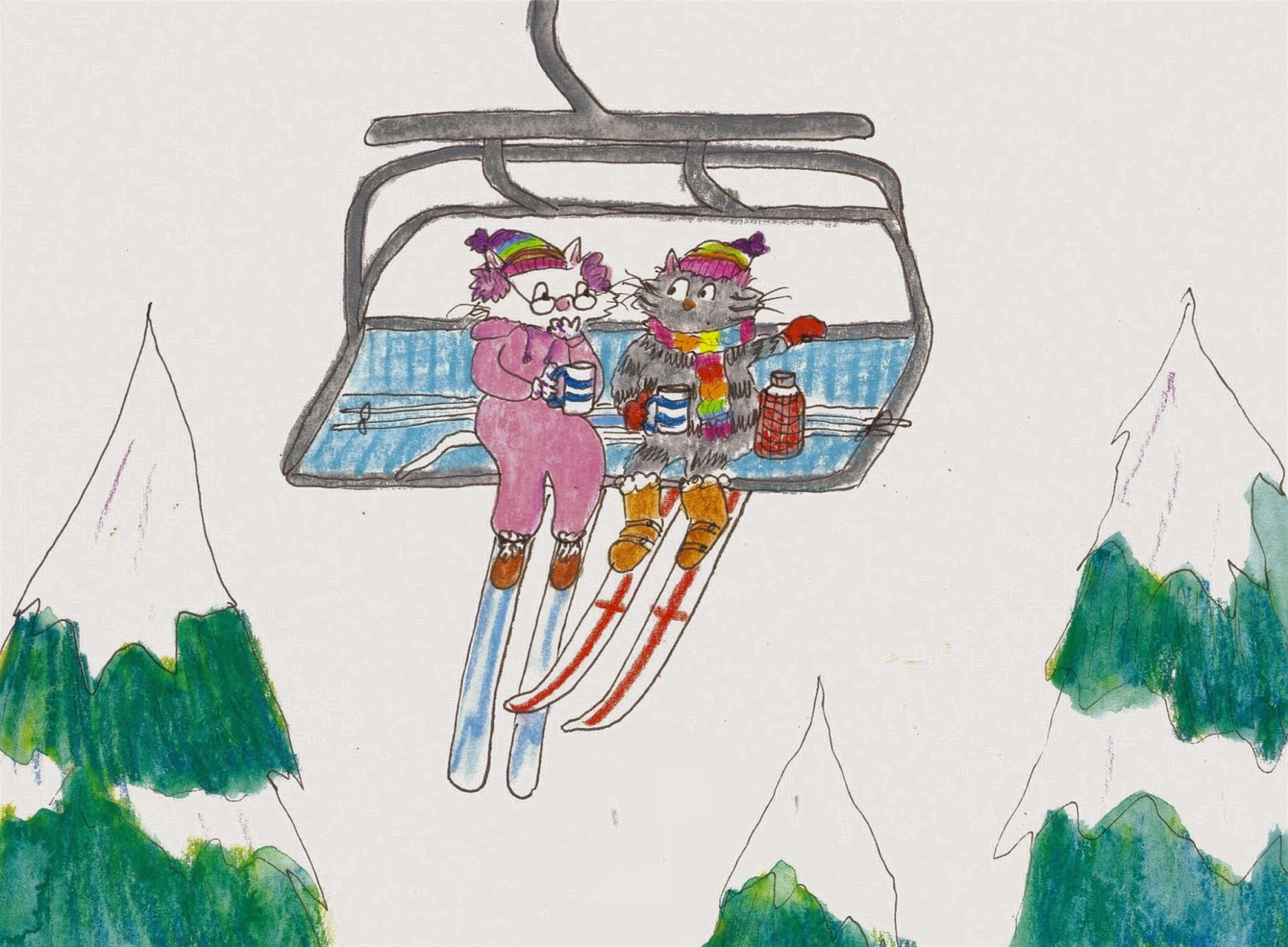 When we were nearly to the top Atticus was slurping away on his hot drink when suddenly he remembered he had left his fish pie cooking in the chalet at the bottom of the mountain. We quickly hopped off the ski lift and Atti told me not to worry, he would be back in flash!

He left me holding the flask at the top of the giant ski jumping slope and shot off to rescue his fish pie from being cremated. 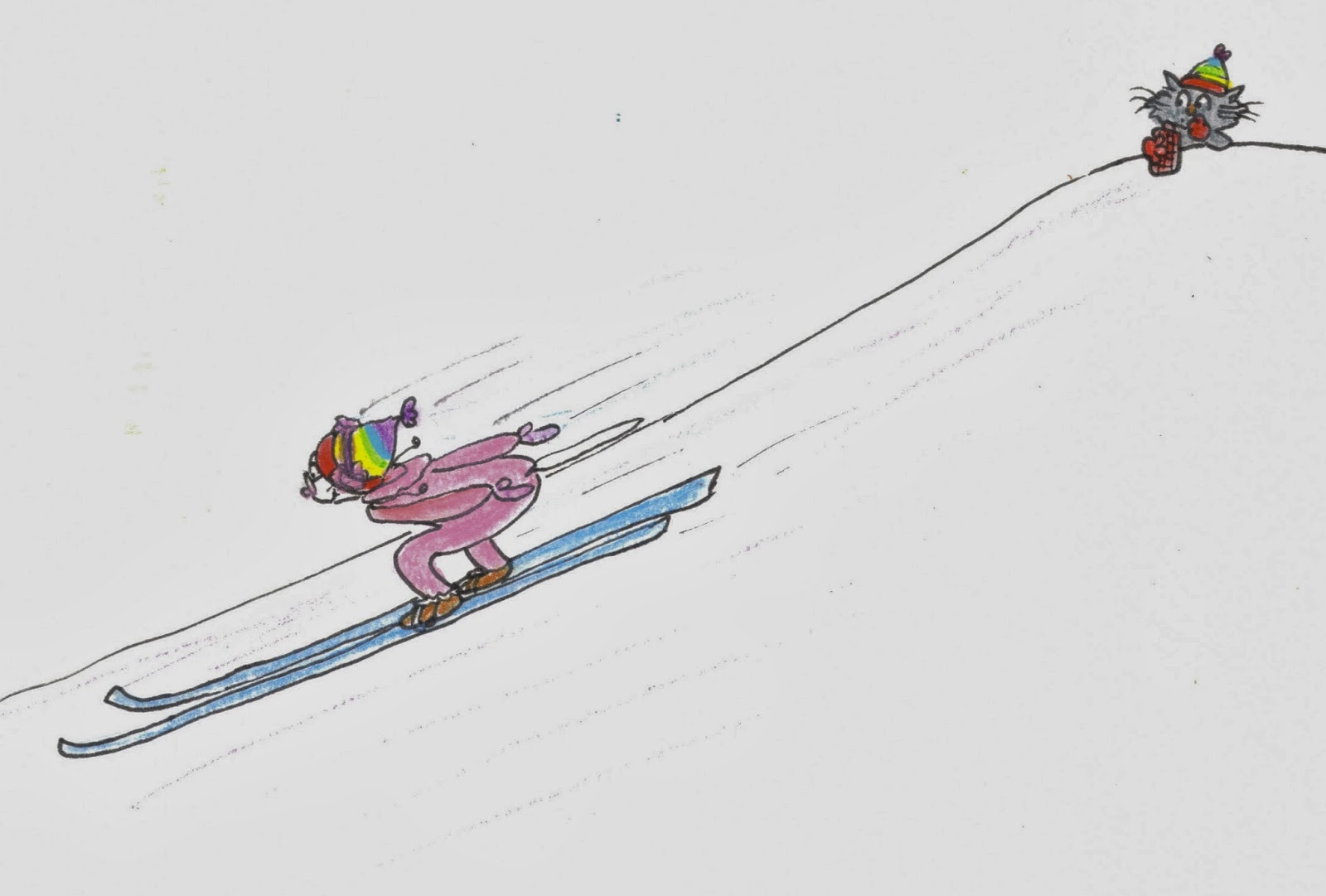 I had no idea that Atticus was secretly a champion ski jumper but of course Atti never brags or shows off. 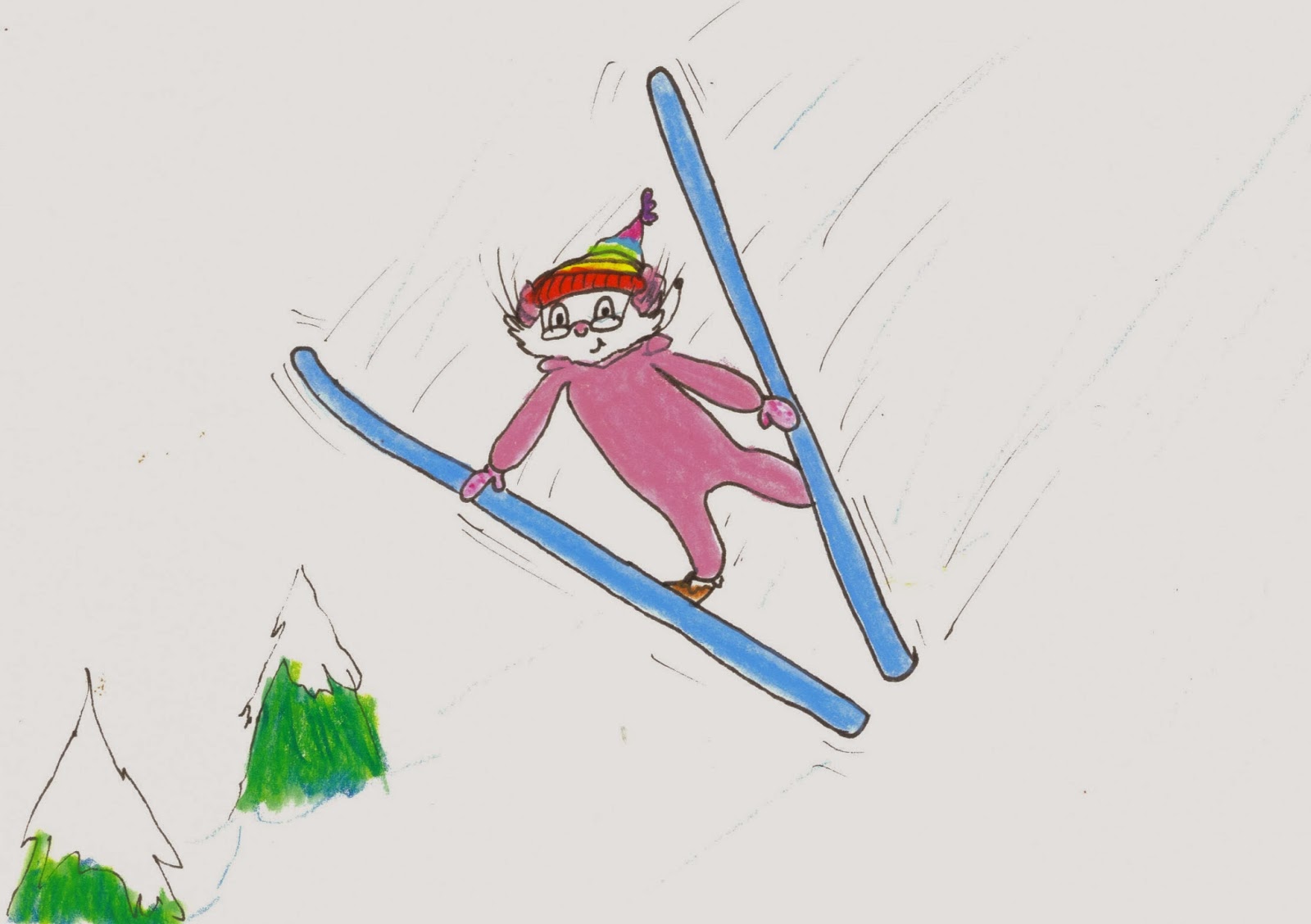 The good news is Atti rescued his pie but has caused quite a stir in the mountain resort!

I'll be back soon, Atti has kept some pie for me. Ta Taa
Posted by Idgie the Cat at Monday, January 27, 2014 No comments:

Good Afternoon dearest blog readers. I have good news about our sports equipment.

It was voted by all of us that little Gizzy Whizzie should get her sports kit first for health and well being reasons.

Hurtling along on a tea tray at break neck speed on the icy Skeleton run in just a woolly tank top with a colander helmet was both seriously daring and perilous.

Jemmy Jim Jams went to the pub to see a ferrety acquaintance of ours called Monty Grabba. It just so happened he had managed to acquire some proper sports kit for Gizzy .... 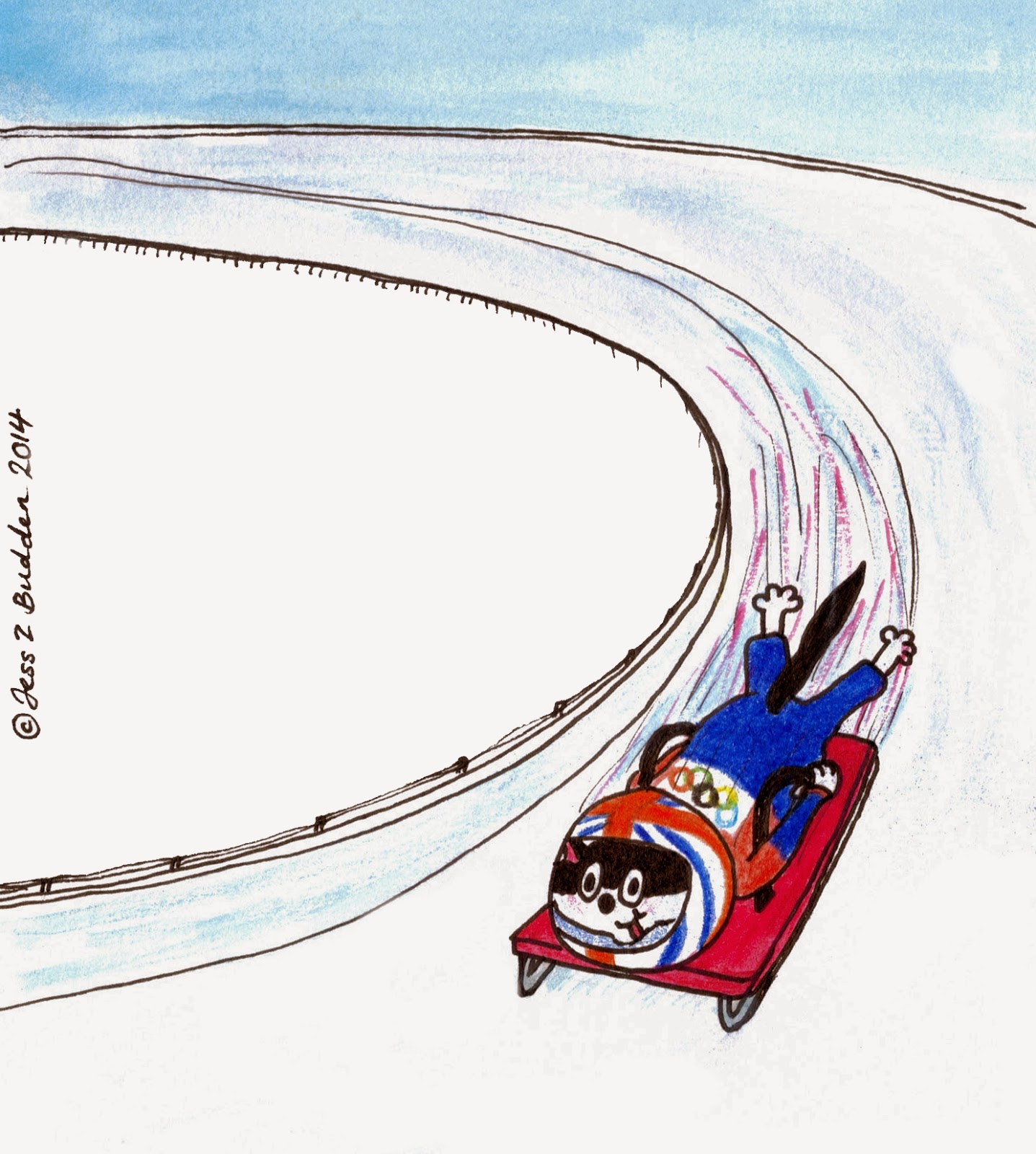 Hooorah! Well as you can imagine Gizzy LOVES this so much and we have very high hopes for a medal.

I'll be back soon -  Jemmy has insisted I try to persuade old Atticus not to wear Lavinia's pink fleece onsie for the Alpine Downhill event. Wish me luck with that! 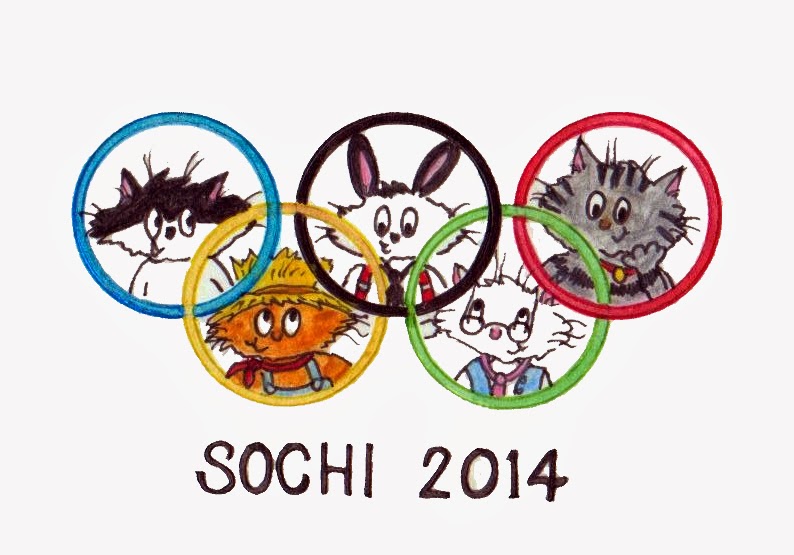 Good Afternoon dearest friends, I do hope you are all very well and keeping your paws warm.

I am sorry to have been off the whisker waves but Jemmy Jim Jams announced out of the blue that she had entered all of us into the Sochi Winter Olympics.... 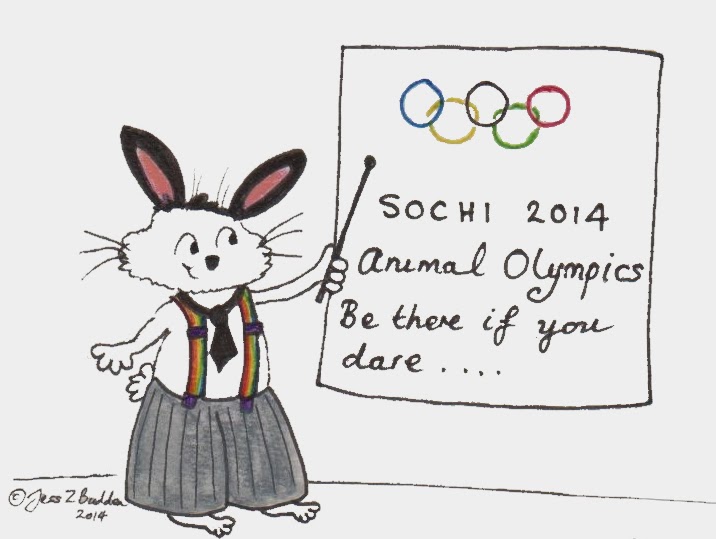 As you can imagine this came as rather a shock and the first problem to arise was the issue of equipment. 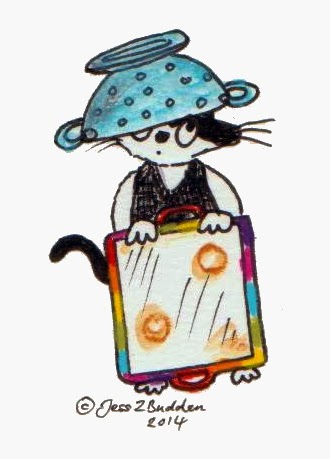 As you can see Gizzy Whizzie has been selected for the Skeleton which as you know is a very fast winter slide so she was given a colander helmet, a woolly tank top and a coffee tray.

Atticus who is used to things going rapidly downhill was selected to do the Alpine Downhill Event. 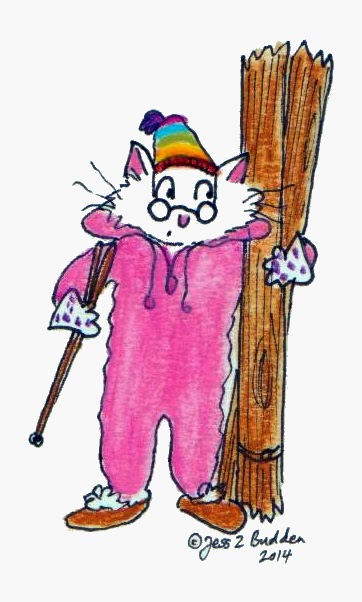 He has floorboard skis and two drumsticks for ski poles.The lycra outfit that Jemmy found for him did not go down too well with the old cat so he has borrowed Lavinia's pink fleece onsie and her oven gloves.

Jemmy is borrowing the floorboard skis to take part in the Biathlon which is cross country skiing and rifle shooting, unfortunately Jem could only get a Tommy Gun online which may not be accepted as a substitute. 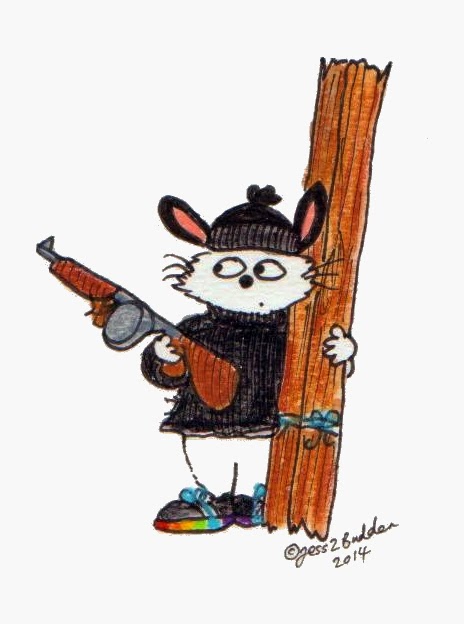 As for me dear readers, I found out I am on the Curling Team. That did vex me for a while as I had fearful bother trying to catch a Curlew for this event. This bird just doesn't want to play Curling with me. As you know I am a team player but I'm wondering if Jemmy may let me do commentating instead with Clare Balding. 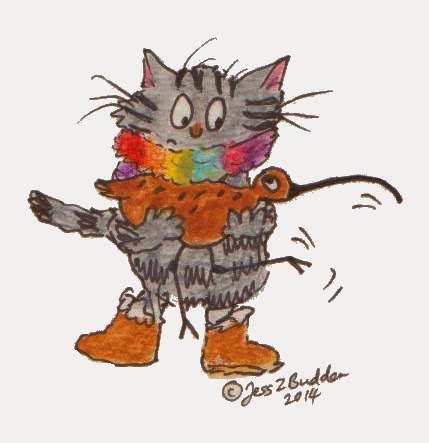 As for dear ol 'Tatty Mudflinger....

He was told to find us a four cat Bobsleigh. He looked everywhere and ended up 'converting' a council wheelie bin. As you can tell Jemmy is going to have a good think about how to get us some proper kit.

She doesn't want to look daft in front of the Russian Mafia rabbits but mostly she wants to impress Katya Hoppenorf who will be in the figure skating so I'm expecting new kit soon.

Righty o I'm off to feed the Curlew.

Watch your whiskers out there and Ta-Taa for now.
Posted by Idgie the Cat at Wednesday, January 22, 2014 No comments: