Ooo No - Not Trixie Mixie !

Good Morning dearest friends, make yourselves a cuppa tea and put your paws up - I'll tell you what happened to me yesterday.

Its been so damp n' nippy do-dah on the paws. I'd got all warm and settled under my tartan blanket to watch TV. I was just about to sipsey my tea and snaffle a brandy snap when I heard a little voice. 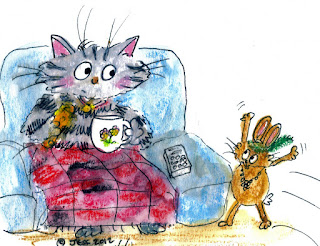 It was one of those little wild brown moon worshipping bunnies from The Clumps. He had been running so fast I could hardly make out what he was saying but then I picked out the awful words... 'Trixie Mixie!'.

I am too young to have witnessed the last outbreak of Trixie Mixie but Old Atticus told me its the most deadliest diseases to hit rabbits . I grabbed my first aid kit and went hot paw to 'The Clumps'. As I approached the wood I could hear the bongo drums and rabbits everywhere were wailing and swaying little lanterns.

There was a huge queue of rabbits of all sizes and ages circling 'The Clumps' and waiting in turn to see Boo Boo Massou the Mystical Healer at her little round hut. 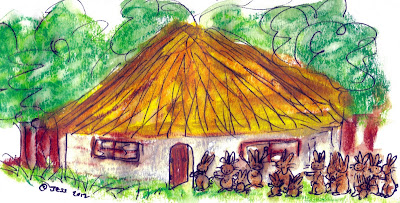 I shot in via the back door and poor Boo Boo Massou was frazzled with exhaustion. Her conker necklace was all twizzled up and her headdress feathers all wonky. She said " Oh Idgie, I've run out of medicinal potions, berries and crystals - I'm down to the last drip of sloe gin and that's for me!"

I'd never seen Boo Boo Massou so worried and it was complete pandemonium outside - mass hysteria had swept through 'The Clumps'. All the rabbits from miles around were knocking on Boo Boo Massous door for a miracle cure. 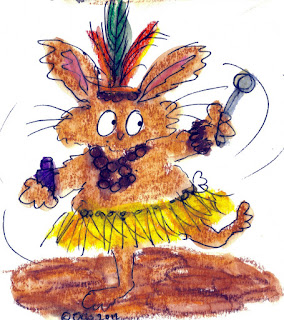 Now I have to say dear readers these little bunnies are a bit prone to being overly dramatic and it just takes one to have a flip out and flash a white fluffy tail and it causes the lot of them to bounce all over the wood.

I eyed up the queue and quickly noted that not one of the bunnies had any symptoms of Trixi Mixie, yet they were all very vocal and convinced they'd got it!!

So I made my way along the queue questioning rabbits as I wanted to trace the source of the hysteria...the first of the rabbits were saying  its Trixie Mixie....further down the queue ...it was Poxy Flopsie....further along it was Quicksie Plopsie....then Lumpy Bumpy...then...Fluffled Snuffles...and at last I approached the end where the symptoms had changed to Coughin'-Frothin'!

In a small hut I found the only little rabbit to look poorly in bed frothing and coughing, his fur all gluey and his eyes wide with fright.

Do not fear dear readers - I knew what was wrong with him straight away and No it is not Trixie Mixie. It turned out that a few bunnies had been playing conkers with The Piglet Possy. For a laugh I expect one of those naughty piglets gave this wild bunny a Sherbert Fiz Bomb Sweet. It is well known that you must NEVER EVER give a Sherbert Fiz Bomb to a rabbit as it makes um go pop eyed and froth at the chops. 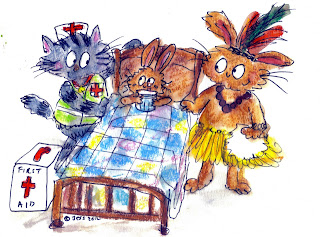 I gave the little bunny a glass of water and Boo Boo Massoue got a soapy flannel and washed all the sherberty glue off his fur and ear 'oles. He was soon feeling a lot better!

Calm came to the Clumps and on my way back home I had a quiet word with the Piglets GODMOTHER about the Sherbert Fiz Bomb incident.

Don't believe everything you hear as it may turn out to be a curly pig tale!! Taa Taa for now.
Posted by Idgie the Cat at Tuesday, October 23, 2012