Good evening dearest friends, I do hope you are all safe and warm in your fluffy warm nests. Batten down the hatches tonight as there is going to be a lot of wind and its got nothing to do with Deirdre the Goat this time!

I'm afraid to say some real ruffians turned up on our patch. They played some nasty trick or treat pranks and lobbed eggs and set off bangers. What they didn't know was Sebby Coo Coo the mafia racing pigeon spotted um with his little beadie birdie eyeballs and flapped pronto to Jemmy Jim Jams. 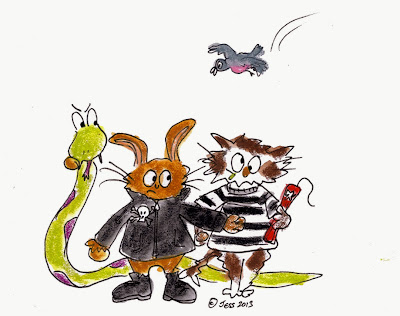 Poor old Atticus was very frightened of them knocking at his door. At first, the dear ol moggy thought they just wanted candy chews and lollies but they demanded cider and schnapsie, so Atti shut the door quick. It shook the elderly ol mog up, he got the jitters and nearly spilt his bedtime coco. 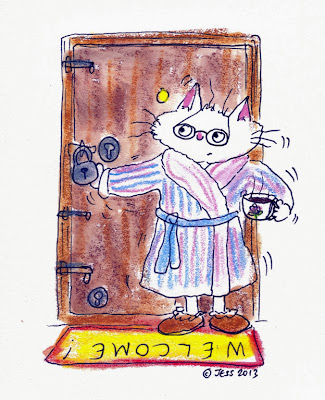 As soon as Jemmy knew what was going on she was furious (gulp) - these thugs had to be taught a lesson she said so her philosophy is to fight fire with fire...or call in the Kit Kat Gang and our own rent-a-mob..the Piglet Possy!

Soon Atti felt much better surrounded by his friends and Jemmy revealed her Revenge Plot! 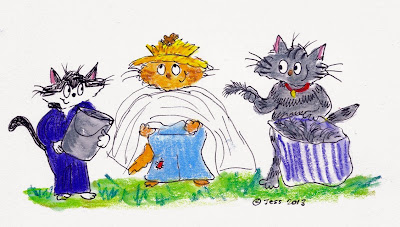 Gizzy Whizzy got a bucket of sticky oil from her garage and I skipperty skipped up to the farm and gathered a sack full of turkey and chicken feathers.

When Lavinia found out that poor Atticus had been terrorised she gladly sent Tatty off with some old dust sheets.

The next evening the thugs turned up at Atticus' door demanding money and shouting and banging...

Gizzy leapt out the bushes and flung the sticky oil over them and I showered them in feathers! Suddenly Atticus' door was flung open by Jemmy Jims Jams and a stampede of wailing ghosts all piled out and put the fear of piglet hell into them!

As they fled Sebby Coo Coo dive bombed them and pigeon pooped on their heads! 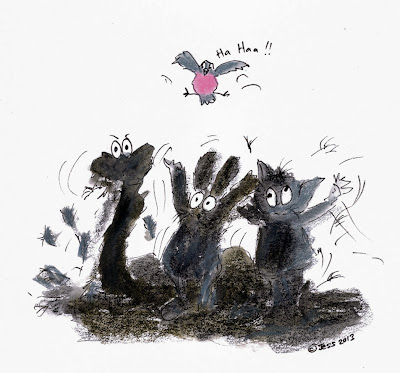 Atticus and all the little animals came outside and everyone had candy sweets and lollies.

Watch your whiskers out there and Ta Ta for now.
Posted by Idgie the Cat at Sunday, October 27, 2013