Good afternoon dearest blog readers ...its been a rainy ol day, we had snow again too but its all gawn n melted now. I hope you are all safe and warm in your nests.

Jemmy Jim Jams and I were having a early morning cuppa discussing Mafia Business, mainly about depleating stocks of Schnappsi Fuel and the horse racing. That's when Petunia phoned from the Sty to let us know Lavinia ( Mum of the four Marmalade Kittens) had been taken into hospital..... 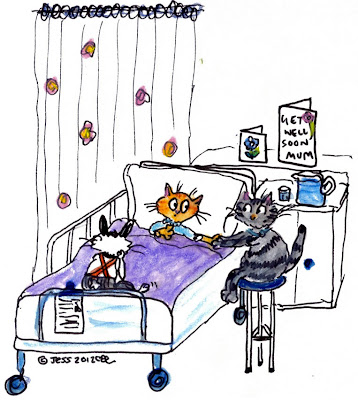 The house fire and the worry of bringing up four very bouncy marmalade kittens as a single Mum had all been too much. Jem and I shot over to see Lavinia in hospital, she was so tired and we soon found out some BIG NEWS! Lavinia was also going to have more kittens!!! Omigawd - I saw Jems paw start to twitch which is never a good sign and we exchanged wide eyed anxious looks. Jemmy hopped down from the hospital bed assuring Lavinia that everything was going to be alright.

Now dear readers, I knew due to my telepathic survival skills that Jemmy was off to Tatty Mudflingers barn to have a word.... (gulp!) 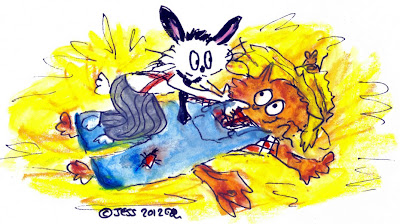 Tatty Mudflinger was suddenly Judo flipped into the straw and found he was being sharply poked in the shonk by the small white paw of the Mafia Godmother. She said " Oi ! Casanova I want a word with you!!!!".

Tatty had always been madly in love with Lavinia and it was common gossip how much he looked like  the Marmalade kittens. In fact, Angus the kitten was his double! Tatty was always out and about with the little ones and he loves them all very much.  Tatty Mudflinger kind of shirks being a fully responsible Dad and he is often found dozing in the straw or twanging a banjo. We all love him, Lavinia loves him but he never ever manages to tell her!

Now I'm not sure what Jemmy said to him in the barn  (gulp...nobody will ever know) but soon after he had dived in the bath with SOAP!! Also just where he got the beautiful diamond ring from is a mystery to most.... but just between us dear blog readers it looked like one of the rings in the Bunny Bunker Jewel Safe.

Anyway...Tatty announced brightly that he was going alone to visit Lavinia in the hospital and he looked very smart indeed, his ear 'oles n paws were a lovely soft marmalade colour rather than muddy. He held a big bunch of roses and a little box in his paw and we all waved him off... 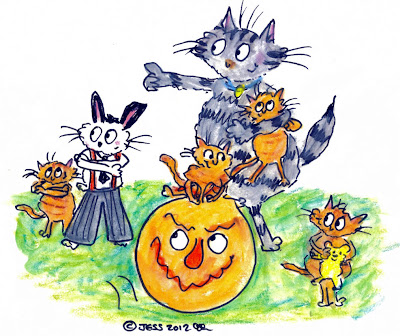 ...well I did. Jemmy was cross pawed and in a menacing kind of stance and fixed her big brown peepers on him. 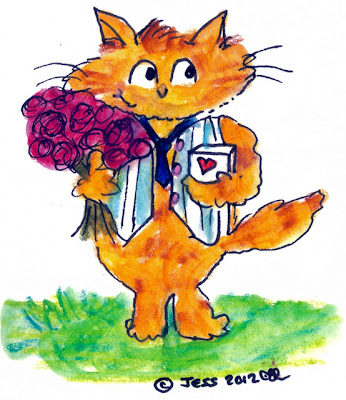 Now for the sake of Tattys health I hope he goes straight to the hospital to see Lavinia coz if the ol' rabbit finds out he has gone a wandering freely n floaty in the daffodils ..all merry whatsit will break out!!