I hope you are all very well and enjoying Wimbledon, despite all this persistent rain. Rain is nice for ducks and slugs I guess but like you I expect its really getting right on your whiskers now!

As you know your own dear Idgie the Cat got roughly FLUNG out of Wimbledon Court One after being caught by a hawk-eyed security bod for selling Jim Jam Strawberries without a licence. (Whoops!)

Fortunately Gizzy Whizzie has been doing excellent trading out on Murray Mount with Strawberry Smoothies. She's been dashing about like a wild fing between the showers wearing her little Wimbledon pinny and boater. Normally I am around to help her but I've had to stay home after the kafluffle with security. 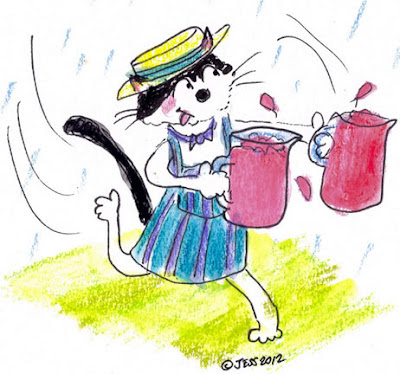 Poor Gizzy has been working flat out and can even de-stalks the strawberries in her sleep! 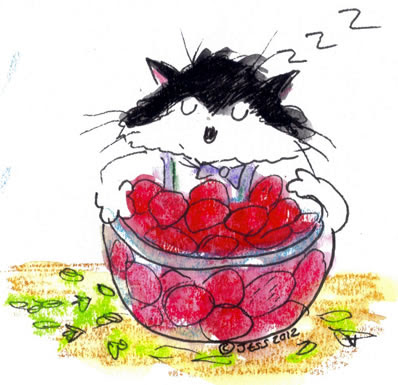 It wasn't till Thursday afternoon that suddenly Gizzy Whizzie nearly nose dived into the washing up in the back of the Stawberry Smoothy Trailer. She got a nasty cough and tried to struggle on with the Smoothie Sales...oooo dearie me...... 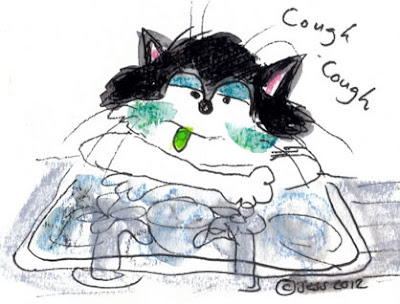 Jemmy Jim Jams arrived at the trailer with the next batch of strawberries only to find poor Gizzy Ka-Splat and Ka-putten in a pool of sticky strawberry slush.

Jemmy made a quick rabbity phone call to a friend in the RAF and a Sea- King rescue helicopter was sent straight to them and very soon Gizzy was tucked up safe in bed. The RAF gave Gizzy some super pyjamas and Jemmy sent a huge bunch of flowers. 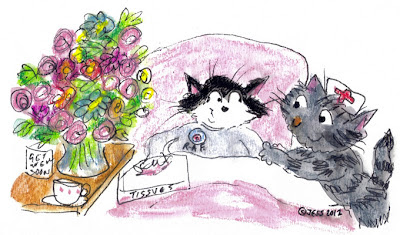 I've been very busy looking after Gizzy and 'er what feed me - you need to watch your whiskers out there as there is a nasty lurgy about that's for sure, I don't want anymore of you going Ka-Splat!

Jemmy is so excited about the Wimbledon final she has switched from Strawberry Smoothie sales to Strawberry Infused Champagne. Atticus has been helping her as he has a certain sophistication and charm to shift the stock! 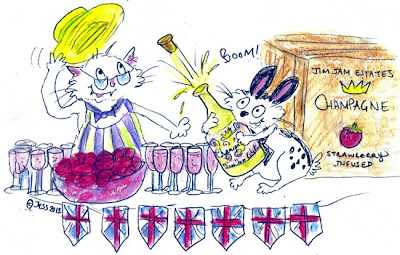 Keep safe and well friendly followers and Taa Taa for now.
Posted by Idgie the Cat at Sunday, July 08, 2012