Good Afternoon dearest blog readers, thank you for returning to my little tabby blog. I do hope you are all very well and I sincerely apologise for being off the whisker waves for so long. Go make yourselves a cuppa tea and I'll tell you where I've been!

Now as you know, my boss is Jemmy Jim Jams - the Mafia Godmother. She shot out of the bunny bunker with a big bunny idea that the way upwards for 'The Bunny Business' was Space Travel! (gulp) The Kit Kat Gang all smiled and nodded (what else can you do!?).

Jemmy informed Professor Atticus and I that we would be representing Jim Jams Universal Travel and we would gain business credibility by going to....MARS! I got very excited as the Muckflinger kittens had told me recently the moon was made of cheese so it was obvious dear friends that Mars must be made of chocolate!

I was given the important job of stocking up the larder as Atticus said the journey to Mars would take a very long time. 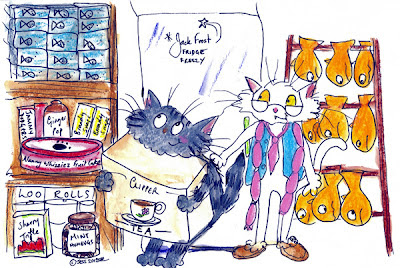 I packed up all our favourite food. Gizzy gave me a big fruit cake that her Nanny Whizzie had kindly made for us for the journey. Paddy gave us a long string of Irish Sausages. Atticus and I cant live without Clipper Tea and smoked kippers so we packed lots of them and several packets of brandy snaps and jammy dodgers. Jemmy met a ferrety acquaintance in the pub and acquired a big fridge and also a huge bargain  stash of  tinned pilchards...so I made sure we also took lots off loo rolls.

The day at last came for lift off and little Angus the Kitten came to the Control room with his Dad clinging to a lucky four leaf clover as heaven knows it was a dangerous and daring mission and Atticus needed all the luck we could get. 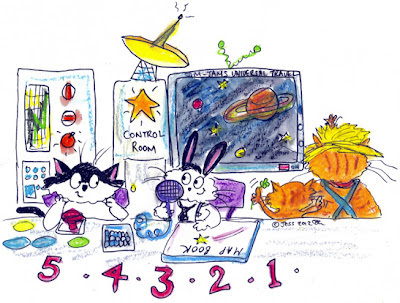 (Ooo I did feel queasy dearest friends, rocketing upwards at an alarming rate on a stomach full of bacon butty was possibly a mistake) 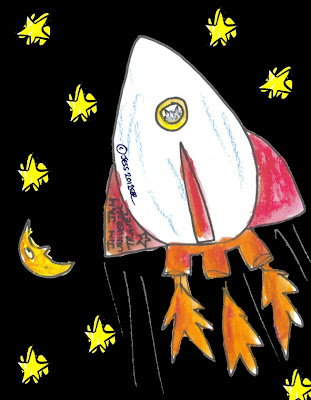 I'm sure you are all relieved to know that our food supplies for the journey lasted out and Atti and I landed on Mars safely. I was told by Jemmy Jim Jams to put her flag on the Planet surface as evidence that we had made it there before anyone else....

I have to tell you that I was disappointed to be very honest with you dear friends as there wasn't a single dollop of chocolate anywhere, it was all red rock and rusty coloured sand. 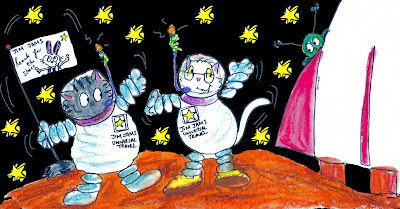 In fact Atti and I wanted to get back to Earth pronto because 'er what feeds me was getting married and promised us a fabulous flashy seafood supper if we got back in time to celebrate.


Just before take off I felt a bit wriggly in my seat due to all those bargain tinned pilchards and I quickly excused myself ....Shhhh...I needed to go for a tabby tiddle didn't I and all that sand looked rather like kitty litter so I dashed off for a tinkle in the great Gale Crater. 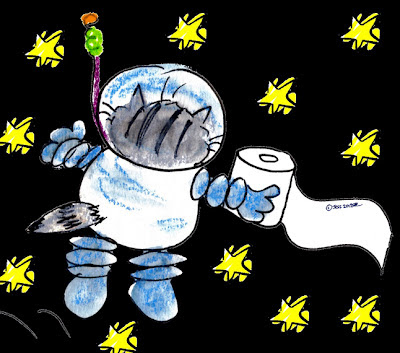 Well as I always say...no matter where you are in the universe you need to Watch Your Whiskers Out There!

SUDDENLY your own dear Idgie the Cat quite unsuspecting any bother nearly got RUN OVER! It was only that lot from NASA with their new flashy Curiosity Rover taking rock samples! I nearly had
a kitten with fright so I legged it hot paw back to the rocket in time for take off. 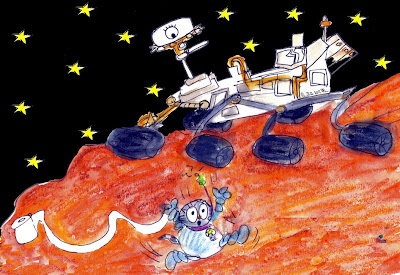 Now you all know why I have been away so long but I'm back now safe and sound and will be back on the Whisker Waves very soon. Taa Taa
Posted by Idgie the Cat at Wednesday, August 29, 2012