Good afternoon dearest blog readers, I hope you are all tickerty-boo.
Er what feeds me is off work today having the ol' jallopy fixed at Gizzy Wizzy's garage and is home making a right mess in the flat (hutch) sorting out her crayons and what-not.
Jemmy and I thought we would hop off and visit Atticus as he hadn't been seen for a few days. He often works on inventions and due to the recent explosions with the home brewing kit, I was anxious for his well being.
So we knocked on his door... 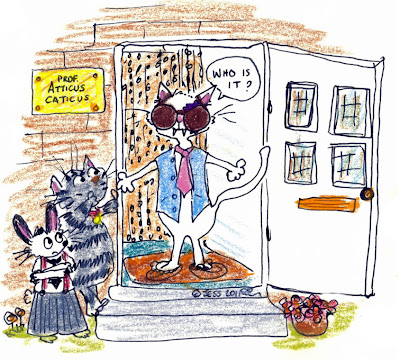 Well...the door opened and the old cat shuffled out in his fluffy moccasins but it soon became apparent he couldn't see anything due to wearing some large dark brown 1970's sunglasses. ..

"Who is it?" said Atticus ...Jemmy frowned and said "Its Jemmy Jim Jams and Idgie the Wildcat MacVity"

Just then Jem & I spotted that Atticus had got a big purply black eye behind the daft dark sunglasses and we demanded to know what low nasty critter had clopped him one !? I gently took Atticus by his paw and Jemmy said she would have a contract out on um in a flash of her little fluffy tail and she would mash um n squish um personally! (Gulp)

Mysteriously Atticus started to giggle and invited us in for tea and jammy dodger biccies.... 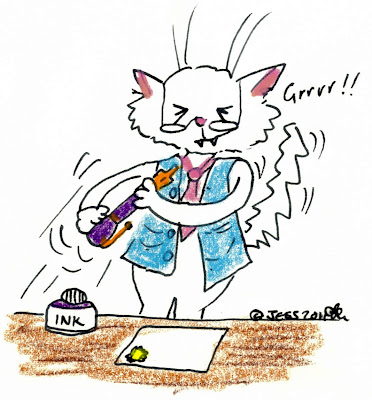 Do not fear dear readers!..Atticus didn't have a big black eye at all! He was trying to write an envelope and his old fountain pen was blocked up. He gave it a big shake to try to unclog it and the ink went splat straight at his eye. Fortunately he had his big lampy yellow peepers shut as the ink hit ! 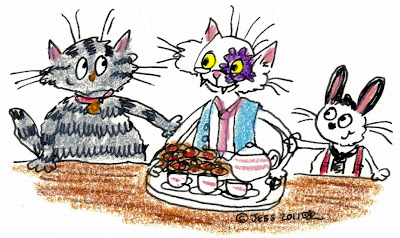 He had tried very hard to wash it off and felt so silly he had found some 1970's sunglasses to hide the inky accident. I suggested I teach him how to email and Jemmy knew a lorry park where she could lay her paws on a hot new laptop for him. Atticus thanked us very much but he said he would give his fountain pen a good wash out after tea.

Watch out for clogged ink pens dear friends and Cheerie-Pip till next time - Ta Ta.
Posted by Idgie the Cat at Friday, November 04, 2011