Gizzy Whizzie woke me up early this morning all excited as she fancied climbing up to the snowy clumps  Woodland Hill with her sledge. She was so bouncy and twinkerly peepered I put on my woolley hat and fluffy Ugg boots. We climbed up the hill and the scenery looked so beautiful.....its at times like this dear friends...that you need to watch your whiskers!

Little did I realise that we were about to be set upon by Mafia Assassins...(can you see them!?) hiding in the conifer trees sent from Don Sharky the Toof! (He's a Big Bad Bunny Enemy of Jemmy Jim Jams the Mafia Godmother - my boss). We had sunk Don Sharky the Toof and his deadly side-kick Arzula the Bamboozler in mint choc-chip ice-cream after a hostage situation last year and he is now in Nutsville Jail ...naturally he holds a grudge...and unfortunatly he has friends on the outside!

Suddenly, my whiskers went twangy and Gizzy and I were leapt upon! There was a mighty scuffle and I could see that Gizzy had been thrown upside down into a snow drift, her little legs wriggled back and fourth and oooooo dear, oh dear that got up my nose didnt it!! 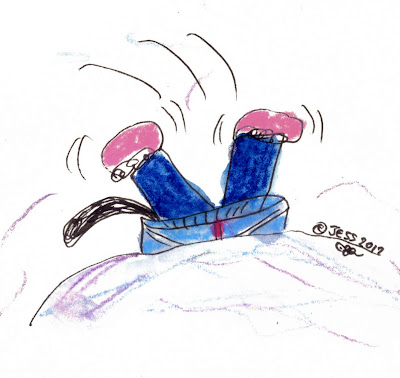 I leapt up all claws n fangs to find three deadly rabbit assassins in black jerseys, one had a big rifle and was pointing it straight at your own dear Idgie the Cat! (Gulp) Three against one aint really the best odds!

I must say I thought I'd had my final bacon butty, when suddenly Jemmy Jim Jams launched from no-where into the air and grabbed the bunny bandit with the gun by the neck! There was a mighty battle in the snow and I managed to pull my bobble hat over one of the baddies heads and swirled him round by his back paws. Katya had rescued Gizzy from the snow drift and they turned the last of the assassins into a giant snowball. 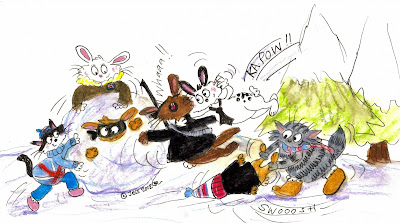 Jemmy was a bit grumpy as all this ka-fluffle had caused her to miss her maple syrup and pancakes for breakfast...(gulp).

Katya and Gizzy quickly went to the Bunny Bunker to whisk up some pancake mixture to cheer the boss up. Jemmy said she wouldnt be long and would be back in time for the first pancake. I was instructed to tie the assassins to the sledge and Jemmy booted them down the hill at speed. Jemmy crossed her paws and peered after them as they all slid into the doorway of the Poacher Pot Pub. I shivered as everyone knows the Pub Menu Special of the week is Game Pie!

Ooo well, Jemmy and I then scarpered off back to the bunker in time for Pancake & Maple Syrup Brunch. As I always say...Watch your whiskers out there!