Good Evening dearest friends and thank you very much for tuning into my whisker waves.

I'm rather excited about tomorrow as Jemmy Jim Jams is preparing something explosive for Easter Sunday up at The Clumps on the hill. The Mystical Moon Worshipping Bunnies believe Jemmy to be THE Easter Rabbit. They provide such an excellent Bongo Drumming Communication Network for the Rabbit Mafia - Jemmy is happy to be their mystical leader once a year.

Due to the recent Inter Burrow Bongo Alert System being very successful at warning Soapy Suds Junior of the Raid on the family laundry business, Jemmy felt it fitting to thank the Bongo Drumming Bunnies for their loyalty by providing some exciting entertainment. 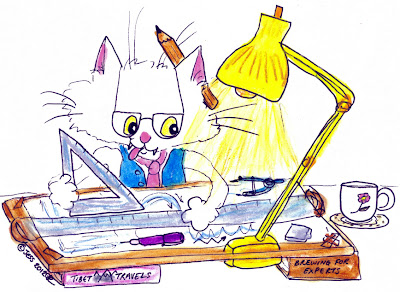 Jemmy went to see our own dear ol' Professor Atticus Caticus and asked him to invent a secret Easter Surprise for the bunnies. All I can tell you dear readers is the Kit Kat Gang will be assembling the invention early in the morning, so if you want to know what Atti had designed - tune into my whisker waves when the birdies n busiers start at sun up tomorrow!

Due to some recent fuel problems Jemmy Jim Jams has flogged almost the last drip of schnappsie fuel. Tatty Mudflinger has been getting prepared to knock up the next dangerous whisker twanging fur frizzling batch of what was originally a killer moonshine! Tatty was on his way home from the barn and he met Monty 'the bargain' Grabba who is a ferret acquaintance of Jems from the pub. He sells knock off stuff and can get anything you could ever wish for ...anyway, he was in an alarming flustery rush and he passed a small checkered handkerchief with three eggs in it to Tatty Mudflinger and said he could have them all for free!! Tatty didn't have time to say thank you as Monty had legged it down the embankment and away. Tatty could hear rattling from inside the eggs and he thought he would take them home to hatch. Lavinia  and the Marmalade kittens would love to see the chicks hatch out he thought so he was rather pleased with himself as he meandered his way home for his tea.

Now...don't forget to tune in tomorrow dear friends to see what Atticus has designed for the Moon Worshipping Bunnies, it'll be fun!

Sleep well in your nesting materials and cheerie-pip for now.
Posted by Idgie the Cat at Saturday, April 07, 2012