Good Evening dearest friends - I do hope you are all tickerty boo and keeping your paws warm on this nippy autumny evening.

Many apologies for being off the techno-waves but I was on care duties for 'er what feeds me. She has been quite poorly for three weeks with attacks of the Colley-Wobbles and Swamp Paddling Delirium which is a tricky sickness for those that do not understand. 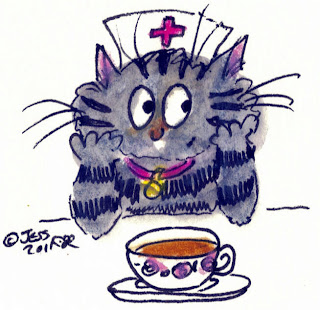 Luckily for 'er shes got me keeping things safe n quiet at home with cups of tea and the Treacle Mine boss at 'er work prevented 'er from drowning in Swamp Guck.

To help out at home Gizzy did the dusting and I have being doing all kinds of chores. We had a few mishaps mainly with the super suction of the vacuum cleaner but on the whole all went well.

Lavinia who is little Angus the marmalade kitten's Mum sent Angus off mushrooming . He went with his basket across the fields. On his mushroom hunt he met good ol' Tatty Mudflinger who just so happened to know lots of great places to pick mushrooms. Angus invited Tatty to come to supper with his family later and Tatty was so happy to be invited he promised to be there.

(Just between us dear readers Tatty is soooo in love with Lavinia. He wants to marry her but Tatty is very shy and has been a bit unreliable in the past and soap shy so Lavinia is not sure about him but everyone knows he would be a great Dad) 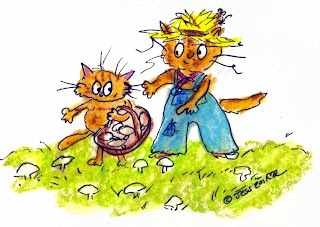 Angus waved bye bye to Tatty and skipped off all over the fields and ended up at The Clumps Woodland. He did as he had been told and didn't stray into the wood but he had lost complete track of time and dusk had been and gone... Suddenly there on the hillside he found the most gigantic mushroom he had ever seen! Angus thought Oooo WOW...he had in fact found a Giant Puffball. He knew his Mum would be so proud of him bringing it home for the family supper. He is only little but he managed to carry the Giant Puffball.

His whiskers suddenly went twangy with fright as out of The Clumps woodland burst three of those primitive brown bunnies that worship the moon. They are not the full sack of kitty kibble if you get my drift and they thought Angus had stolen the MOON! Angus ran ! He ran and ran clinging to his Giant Puffball and the daft brown bunnies gave chase waving their spears n hollering! 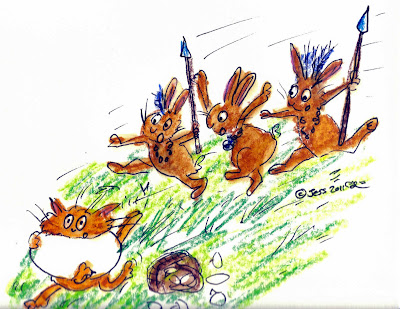 Angus dived through a prickly thicket panting with fear still clung to to the Giant Puffball when dramatically who should appear...

Jemmy Jim Jams the Mafia Godmother was on her way to Windy Ridge to the Casino that Deidre the Goat was running for her. She leapt protectively in front of Angus and all the wild brown bunnies dropped their spears and fell to the ground. Jemmy pointed to the sky and told them all off as the Moon was still in the sky! They were very sorry indeed and scuttled off quick back up to the wood.

Jemmy made sure Angus got home with his Giant Puffball then scampered off to Windy Ridge to collect the night takings!

I'm happy to say Tatty kept his word and called round for Giant Puffball Rissoto Supper and they were all very happy. 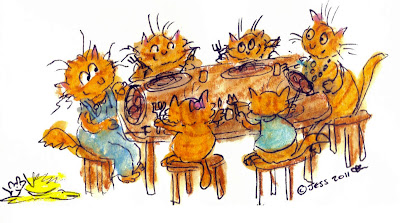 Bless you all out there and very best wishes to those poor souls suffering with the Colley Wobbles - there is sunlight in your brain I promise and all will be well, watch your whiskers out there and sleep safe in your nesting materials. Ta Ta
Posted by Idgie the Cat at Saturday, October 15, 2011