Good Evening dearest friends, I do hope you are safe in your nesting materials as tonight is so windy n rainy, it messes up my fur and stripy dramatic presence!

Now, I expect you remember the hoo-haa up at the Christmas Tree Plantation, we had intruders that were scared out of their furry wits and chased off by our very loyal mafia llama Alleron. I suspected the attempted theft must be the work of the Morrello Cherry Brothers who are Mafia too but not on our Manor. They must be mighty hard up to try n nick Jemmy Jim Jam Christmas Tree Stock and suspiciously foolish as nobody in their right state of brain would cross my boss!

So... I did a bit of tabby cat reconnaissance work with my noculars and watched the Morrello Cherry Ice Cream Warehouse to see what they were up to. Mam-Ma Morrello their 'ol mum runs the joint, she's a small brown rabbit but not to be messed with especially when she's working on her ice cream flavours.

I watched for ages only stopping for snaffling. Sebby Coo Coo the Mafia Racing Pigeon flapped on over to see if he could help and I sent him up to a window ledge to do a bit of snooping n beady eyeing of the warehouse. I had him in the sights of my ol noculars when suddenly a fluffy brown paw grabbed him by his little feathery Gregory n snatched him through the bars of the window. 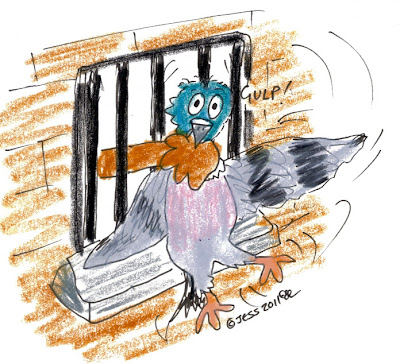 I was shocked I nearly dropped my bacon butty! Poor Sebby Coo Coo, I scrambled down the wall I'd been sitting on and was about to charge in all claws n teeth to get him back when Sebby came dive bombing out the window! He swooped and flapped in an awkward way as a letter had been gaffer tapped to his feathers. He started to plummet down the building and I dived forward and caught him a whisker away from oblivion! 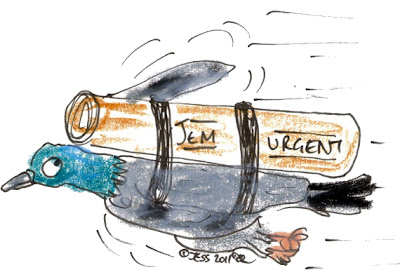 Due to my nursing skills I was able to gently remove the gaffer tape from poor Sebby Coo Coo and could see the letter was for Jemmy Jim Jams and it was marked URGENT.

I legged it hot paw to the Bunny Bunker HQ to deliver the letter to the bunny boss. 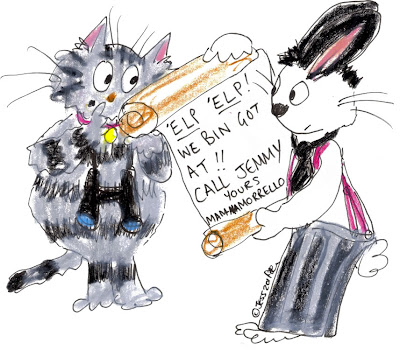 It soon was revealed that Mam-Ma Morrello was in a whole heap of bunny bumbles. Ohh yes..dear readers, big bumbles indeed as rival Mafia never communicate by pigeon unless in dreadful peril. The letter said "'elp elp! We bin got at!!" signed Mam-Ma Morrello.

Jemmy wondered if it was a trap at first but the letter had the unique aroma of Morrello Cherry Liqueur which convinced us that it was genuine.

Righty o dear friends, as you can imagine Jemmy has got me rounding up all the KitKat Gang and friends to help rescue Mam-Ma Morrello.

I'll be back soon on the whisker waves to tell you what happens. Until next time, watch your whiskers out there. Taa taa.
Posted by Idgie the Cat at Thursday, December 08, 2011