Atticus and the Telescope

Good Morning dear friends, what a beautiful sunny day and it's a Bank Holiday so 'er what feeds me is quite chirpy and twinkerly peepered!

Last night I got home extremely late and 'er wasn't happy as she had even more grey hairs and that frazzled expression of worry, which I am sorry about coz I know she loves me BIG!!

I had such a great evening dearest blog readers as I eventually arrived at Atticus' House which is really an old Observatory. He draws lots and lots of charts and maps not just of the stars but of machines and buildings too. He always says ..." Lets have a nice cuppa tea young Idgie" which is always a jolly good start to conversation don't you reckon? 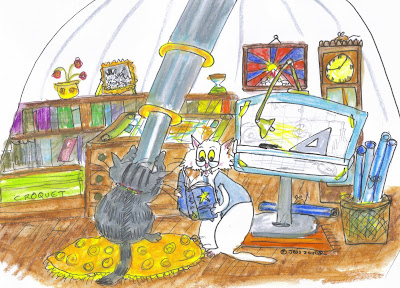 He always lets me have a sweeping view of the Universe with the giganticus telescope as I got high hopes of spotting a UFO. I'm not that hot-pawed at moving the telescope but Atticus pointed out a star constellation called 'The Big Kipper'. Then, I saw a bright big yellow planet. Atticus and I got very excited indeed. He was looking all through his books and charts and thought it very mysterious that it was so low on the horizon. I twizzled the focus and I nearly fell off my cushion as this planet had its name written on it in red letters. Atticus was scratching his head all bewildered like and asked me to read it out. ..I proudly announced I'd discovered the Planet Lidl! Atticus was chuckling as I'd focused in on a supermarket Logo! Atticus very kindly patted my woolly head and said all this talk of Big Kippers had made him hungry and asked if I'd like to join him for a fishy snaffling....yum yum.

It was ever so late when I left with the Blue Prints for Jemmy.

Have a loverly bank holiday and Cheerie Pip till next time.
Posted by Idgie the Cat at Friday, April 22, 2011