Hello dearest blog readers, today has been a bit grim to tell the truth but I know I can talk to you about it..

It all started early this morning when my boss Jemmy Jim Jams the Mafia Godmother got a phone call .....

﻿
I knew it must be bad news by the way she twisted in the office seat. The phone informant had told Jemmy that a family of those Mystic Moon Worshipping Bunnies up at The Clumps Woodland had been done in by some small black n tan wooffets! Who could they be..?
(Gulp)
Jemmy then muttered something about .."Not on my Manor!"& sighed ...then something about the importance of loyalty...and said it was....'disappointing'....
(Double Gulp)
She picked up her violin case and hopped off which is always a sign dearest readers that she's not too chipper about goings on.
Well I forgot all about it and was hopping home this evening when it started to rain. I spotted a small tent on the canal bank so scampered in to find Paddy the Woofet who normally runs the Woofet Ferry Boat. 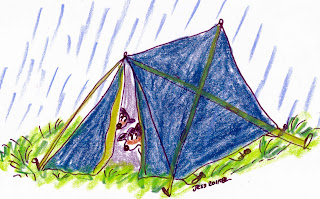 We are friends and often share Irish Sausages. He had some very very bad news, whilst the woofets were up the pub having a Guinness & pork pie for lunch the Woofet Ferry Boat had mysteriously SUNK!! There were just a few gerainiums & tennis balls floating on the canal where it had been and all the Irish Sausages had gone down with the boat! It was a dissaster...
When the rain stopped I shot off to let Jemmy know that the ferry had sunk but I bumped into the Chief of Police. He wasn't too happy either as he was very busy dealing with a Bunny Massacre and the mysterious sinking of the Woofet Ferry.﻿ 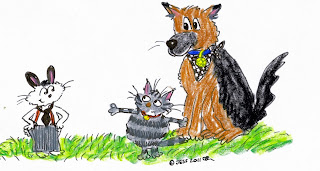 We found Jemmy and I told her about Paddy the Woofet and the boat sinking and the loss of all those Irish Sausages. She didn't look too bothered to be honest dear readers...The Chief of Police asked Jemmy if she had heard anything...
Jemmy put her paws on her hips and said there had been a terrible up-rising of Sabre Toothed Wood Worm this year...and that would be why the wooden boat had sunk so fast. Nasty ol' Wood Worm ..what a shame..
Tomorrow will be better I'm sure!
Watch out for wood worm dear readers and be loyal to your pals...Night Night
Posted by Idgie the Cat at Tuesday, June 07, 2011